Sled Hockey allows anyone with a physical disability to enjoy the thrilling sport of ice hockey. Sled Hockey is similar to "traditional hockey" in terms of concept and rules. The main difference is that instead of standing up to skate, players sit on a cushioned seat that is mounted on a tubular sled which has skate blades and a center pivot underneath to form a tripod. The player sits four inches above the ice and is held into the sled with Velcro straps. The other principal difference is that in Sled Hockey, players use two shortened hockey sticks with a curved blade on one end and generally 6 to 8 metal picks (similar to the end of a figure skate) on the other end, which enables players to handle the puck and thrust themselves across the ice. Hard checking, elevated puck shooting and 60-mile per hour slap shots are as much a part of sled hockey as they are in traditional hockey. It requires great upper-body strength, balance and the ability to handle the puck.

Sled Hockey (or Sledge Hockey as it is referred to outside of the United States), originated in Sweden and has been played in Europe since 1971. Before long, Canada followed the trend and possesses the largest program in the world. It emerged in the United States in the 1980's, with the first and solitary national team at the time based in Minnesota. Today, many well known programs implement weekly practices and games throughout the United States. The national governing body of the sport is the United States Sled Hockey Association (USSHA).

The Liberty Bell Games proudly supports the USA Sled Hockey Team and we encourage you to pledge your support to these exceptional athletes. Please visit www.usahockey.com for more information. 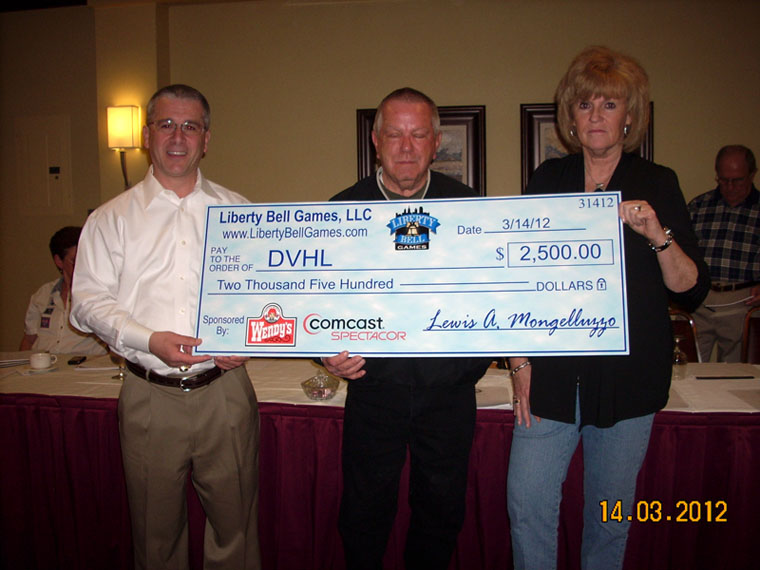 On March 14, 2012, Lew Mongelluzzo, President/CEO of the Liberty Bell Games and their Sponsors; Wendy's and Comcast-Spectacor proudly made a donation of $2,500 to Tom Brake, the Commissioner of Sled Hockey for DVHL and Colleen Marinari, the President of DVHL. The donation has been allocated for the purchase of new sleds and equipment.